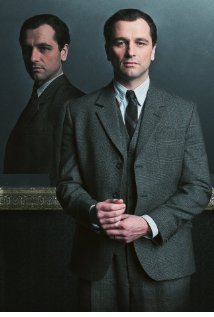 This is based on a Daphne duMaurier book, a previous film adaptation starred Alec Guinness. I don’t know the lead actor, Matthew Rhys, but I did recognize a few of the actors in the smaller roles. The story is a period piece taking place in the 1950s just when England's Princess Elizabeth is about to be crowned as Queen Elizabeth II. A teacher John is just leaving his post at a boys school—you can tell he is definitely not of the social or economic class of his students’ families. He teaches Greek and it is decided that these old languages are not needed anymore in the modern world, so his post has been eliminated. A bit bitter, he drinks at a hotel bar where he sees a man who amazingly looks exactly like him. He and this other man, Johnny (played also by Rhys), learn a bit about each other and Johnny buys him drinks and they stay the night at the hotel when they get too drunk. When John wakes, he finds his clothes are gone and a personal driver has arrived to take him “home”—Johnny’s home—believing John to be Johnny.

At first John tries to convince people he is not Johnny—they just think he has a bad hangover—until he meets the family. Lady Spence, the mother (Eileen Atkins), is a bedridden matron who does not go out anymore; wife Frances (Alice Orr-Ewing) is one of those sweet wives who loves her husband, not knowing his bad side; brother Paul (Andrew Scott) is trying to hold the family business together, a glassmaking factory; Paul’s wife Nina (Sheridan Smith), whom John finds out has been having an affair with Johnny; Blanche (Jodhi May), the outspoken sister; and Mary Lou, Johnny’s precocious daughter.

Bit by bit he is taken with the Spences, and to a lesser extent he is enjoying the life of a heritaged and monied family; but he also wants to find out why Johnny has forced him into this impersonation. It seems the factory is not doing well, and Johnny had been on a business trip to negotiate a merger; unbeknownst to everyone, the details of the merger are not good for the family or their workers. Johnny has run away and taken this unique opportunity to leave his problems to John to deal with. John is unable to tell the hard truth to the family and the factory workers, so stumbles about trying to find a solution and playing for time. At first he just wants Johnny to retake his life, but as we start to see secrets all around, John slowly sympathizes with the family, even falling in love with the wife Frances. But Johnny has been pretty dastardly and all his actions have caused problems for each member of the family. John’s presence and actions within the family change everything for the better for all the characters.

The film ends with the family watching the coronation on their newfangled tv. The coronation conveys the idea that is paralleled in John’s story, of someone forced to take a role they are not ready for, but was able to overcome their personal fears and limits to do so. And also that the world (and the family) is ready for something new and modern (also touched upon where John is fired due to teaching ancient languages). The title sequence of the movie also conveys the running away aspect of both John and Johnny, as the E in “The” is butted up against the SCAPE in “Scapegoat“ briefly, suggesting the word “escape” allowing not only Johnny’s escape from his family and problems, but John to escape his old life to something new and exciting.

There is a lot of atmosphere, feeling like a film noir or spy movie. The period details are also good. While a couple of the characters were a bit rote in their characterization, such as the heavily made up sister-in-law/mistress, or the sister, who always wears slacks and is revealed to be a lesbian, the story is suspenseful and Matthew Rhys does a good job conveying two opposite characters, although Johnny's personality does not match the rest of the family at all and I question how they could have been so blind to his true nature. There is a strong sense of "what if" Johnny had stayed with this family, and it is apparent that the family would have been destroyed because of him. But John's nature of goodness is enough to change not only the family dynamics and improve relationships within, but also force a better outcome for the business as well; both results of course point to a better future. This too is reflected in the coronation--a sense of a better future for the country.
Posted by FilmNoter at 11:16 AM