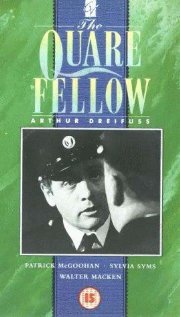 This film is based on a play by Irish playwright Brendan Behan. Often when we think of prison films, it is most likely from the prisoner's point of view. In The Quare Fellow, the story is about a young idealistic prison guard. The film appears to take place over only a few days.

Patrick McGoohan is the main character, Tommy Crimmin. On his first day at work, he is full of zeal and sees his job as one of protection, pretty much black and white as to what he is there to do. He is a little naïve, being a country boy from rolling Irish hills.

It's evident early on in the film that the story has something to do with capital punishment, as there is a man in the solitary cell having a hearty meal, and discussion that the doctor has to make sure the prisoner is healthy before he is executed.

There are two men waiting to be executed. Tommy meets the wife of one of them (Sylvia Syms, who forgets her Irish accent for most of the film), and she feels that she has somehow caused her husband to be in this position. But she is also quite hardened to her predicament.

Although McGoohan doesn't appear that young (he was 34 when he did this), his character of Tommy is naïve and gets tricked/taken advantage of by prisoners (teasing, not really malice), which gives the film a bit of humor (just a bit, it's quite depressing otherwise). Also there is no training, Tommy is just thrown into the job on his first day, although there is a helpful older guard (sympathetically acted by Walter Macken). They discuss whether each "believes in" capital punishment.

Through his witnessing the wife's behavior and guilt, whom he sympathizes too much with, and his own experiences at the prison, Tommy eventually is uneasy about the execution. Character by character, we see how others are affected too.

While the film does not brutally portray prison life in more modern films like The Shawshank Redemption or Midnight Express, it does contain typical things like nasty guards, demoralizing the new prisoners, not-so-nice living conditions and demeaning treatment.

There was some bad editing in a scene where Syms talks about why her husband is in prison, it's obvious it was filmed in two separate segments and don't match. Macken's character has a moment where his pent up anger gets the better of him, which is what I think the film's center is--he feels useless as he can do nothing, although he disagrees with the situation.

There are small moments of realism like Tommy being told to take off his watch as the execution nears; or the executioner, at first appearing like an irresponsible drunk, but actually needing alcohol to get up the nerve to do his job, that show the seriousness and drama of the film.

The story is open as to what its stance is, but not overly political about it. It would have helped me to have subtitles, both for the accents and some terms in the dialogue. The title is a slang term for a condemned man.

Posted by FilmNoter at 4:12 PM

Email ThisBlogThis!Share to TwitterShare to FacebookShare to Pinterest
Labels: based on a book, drama, Ireland